Touchscreen devices are no substitute for books in the early years --

Your child will grow up never knowing a world without smartphones and tablets.  Already, devices in little hands are becoming the norm.  But at what cost developmentally?  There has been a lot of talk about the dangers of excessive smartphone use among teenagers, but very little said about the equally concerning trend towards overuse by the youngest among us.  Given the explosion of touchscreen applications (apps) for toddlers and preschoolers, it may be time to have that conversation.  App or lap?  It’s your decision. 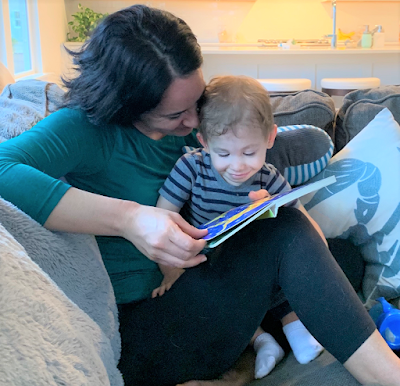 Apps on touchscreen devices: a burgeoning market for an easy target

Creators of digital learning apps and games are positively giddy with the possibilities of marketing their products to parents of young children.  Exhausted parents are easy prey.  But more than that, what parent can’t be convinced that these apps provide learning opportunities, or a head-start with the technology that will be a big part of their child’s life?

Traditional forms of media, like television and DVDs, have been around a long time and children’s programming has been extensively researched.  The American Academy of Pediatrics (AAP) sets viewing guidelines.  Child psychologists are fixtures on content development teams.  But television and touchscreen devices are not the same, and unfortunately, the proliferation of learning apps is outpacing the little research being done on their developmental effects.

Per the AAP guidelines, American toddlers are watching too much television – 90% are watching regularly by most estimates.  And the number of hours per day they are watching has been steadily increasing.  The quality of children’s programming may be improving, but still the recommendation is little or no screen time for the under-twos.  There’s just too much real-world learning to do in precious waking hours.

For preschoolers, the recommendation is one hour or less of quality children’s programming - shows that are as engaging and interactive as possible.  For example, the characters in Sesame Street, long considered the gold standard, talk directly to their young viewers, asking questions and giving them time to respond.  Elmo, Cookie Monster, and the gang feel like familiar friends.  In Blue’s Clues and You, a current favorite, Blue invites preschoolers to play along and solve mini-mysteries.

Touchscreen apps and games are interactive by their very nature.  They can respond to something a child does and prompt actions accordingly – something television simply cannot do.  It’s also easier to fine-tune preferences for temperament and interests and so forth.  If designed well, the child is able to progress through levels of complexity as their understanding deepens.  When used in moderation, these apps can be beneficial for preschoolers, especially over passive television watching, but are still best avoided under the age of 24 months. 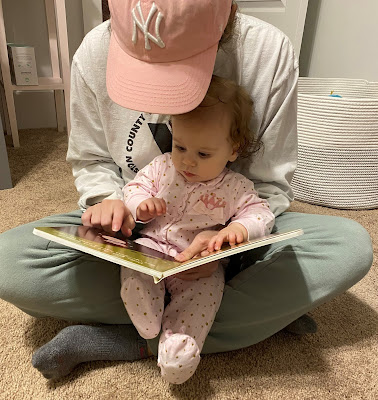 Touchscreen apps are problematic for babies and toddlers.

Developing perceptual and cognitive systems make screen-time particularly problematic for the very young.  This is a time of explosive development.  Immature systems are wiring up rapidly in response to experiences in the outside world.  But what if those experiences are happening in two-dimensions, rather than three?  What if the child is no longer exploring the physical world with his five senses?

The transfer deficit is already well-known and occurs across a broad range of tasks: what a child learns on the screen does not readily transfer to the real world.  For example, if a child learns to create shapes with Lego® on an iPad, he is not able to create those same shapes when given real Lego® to play with.  It’s as if he has never done it before1.  Learning without transfer is not learning.

It’s best to be wary of apps marketing to children two and under as well.  This age of child simply does not have enough capacity to master the tasks in two-dimensions, let alone transfer the learning to three. 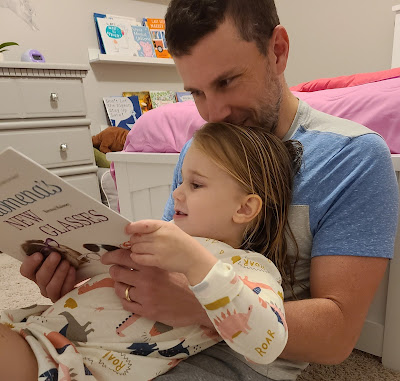 The hallmark for healthy development is social interaction between adult and child.  As the saying goes: Babies are designed to learn, and adults are designed to teach them.  The best interactions are what psychologists call serve-and-return, meaning the child and a loving caregiver are responding to each-other’s cues in a back-and-forth fashion.  The more formal term for this is joint attention. 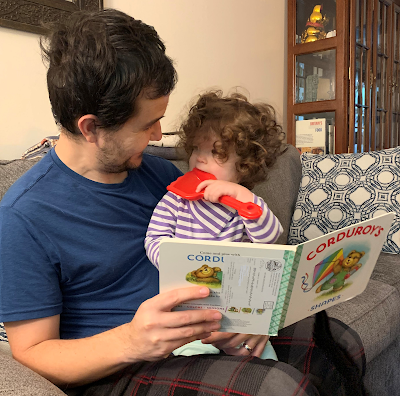 Software designers use various tools to simulate joint attention within their apps, but no matter how sophisticated the software is, it’s hard to capture the same emotional tenor with a device that a shared reading experience with a print book provides.  Even when an adult is engaging with the app in tandem with the child, it’s not as easy to engage in the rich back-and-forth conversational experiences that are conducive to language and early literacy, nor the emotional bonding that is necessary for healthy attachments and self-regulation. 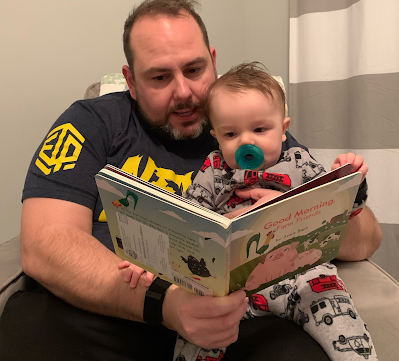 It might surprise you to learn that young children are even more vulnerable to the addictive nature of smartphones than your average teen.  They are soaking up everything new like little sponges, and are especially attuned to cause and effect.  Making something happen is hugely gratifying to them.  This is not lost on app designers:  The delight a toddler gets from touching a screen and making something happen can be likened to the dopamine hit a teenager gets from a like on Instagram.  It manifests on a neural level with the literal secretion of dopamine.  And dopamine is an integral part of the reward pathway, which means it keeps them wanting more.

With brains still in the early stages of development, inhibiting a rewarding behaviour is especially difficult for this age group.  In other words, it’s very easy to capture their attention and keep them interacting with an app, but not so easy to get them to stop.  Apps designed with multiple techniques to keep a child interacting can be highly addictive.  We are already starting to see compulsive use of devices among our youngest, and the trajectory does not look promising.  Any parent who has tried to take a device away from a two-year old hypnotized by a screen knows how difficult it can be to penetrate this digital bubble.  These devices are terrific at keeping your little one occupied, but at what cost developmentally? 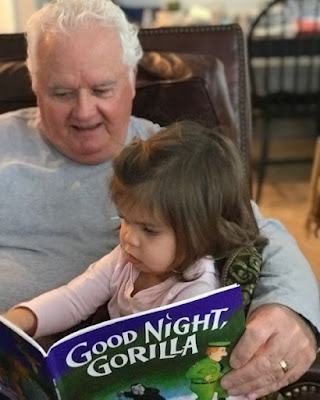 You are the gatekeeper of your child’s devices.  Limit the time your preschooler spends on them and try to avoid them as much as possible with your baby or toddler.  At the very least, be mindful of when and why you’re handing your little one your smartphone or tablet.  And here’s some food for thought: hand him a book instead.

There is no shortage of research supporting the positive power of books in a child’s early years.  Books offer many of the same features as apps, but without the associated risks.  They can be tailored to your child’s interests, customized to the age and stage of your child, and grow in complexity along with him.  And they’re convenient and portable.  There’s no better way to set your child up for a lifetime of success than surrounding him with books and making reading an enjoyable and habitual part of his life.  Dolly Parton’s Imagination Library/BEGIN WITH BOOKS makes it so easy.  Children up to the age of five enrolled in the program receive a new book in the mail every month absolutely free! 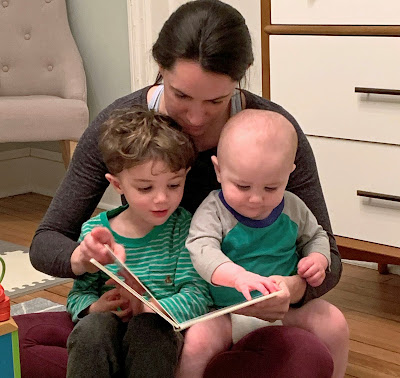 Popular posts from this blog

July 27, 2021
Are you reading regularly to your little one?  If yes, keep it up!  You are preparing your child for life-long success.  The American Academy of Pediatrics (AAP) recommends reading aloud to children for at least 15 minutes a day beginning in infancy.  Those 15 minutes spent reading together can be the best part of the day for both of you.  According to the AAP, children who are read to during infancy and preschool have better language skills and are more interested in reading when they start school.  What's more, sharing a book helps kids and parents create a closer bond which is so important for cognitive and social-emotional development. Reading to a child doesn't always come naturally Even though educators and children's advocates have long beaten the drum about the importance of reading to children, it doesn't always come naturally to parents.  They may have negative associations around reading and books from their own childhood, or school experience, or be uncomfor
Post a Comment
Read more

September 28, 2021
Thought and Deliberation Go into Each and Every Book Selection --   BEGIN WITH BOOKS (BWB) is pleased to have two new books in its rotation and on bookshelves in the month of September: Baby Builders , by Elissa Haden Guest, illustrated by Hiroe Nakata, for children turning three, and Brick by Brick , by Heidi Woodward Sheffield, for children turning four. Hundreds of potential titles are reviewed every year for inclusion in Dolly Parton's Imagination Library (DPIL).  Let's explore why these two books in particular may have been chosen. The Book Selection Process A tremendous amount of thought and deliberation goes into each and every book selection.  The Blue Ribbon Book Selection Committee , DPIL's panel of early childhood literacy experts, convenes annually to review and select books for the following program year.  This diverse group of experts is made up of  teachers, librarians, authors, and early childhood educators.  The richness of their backgrounds ensures that
Post a Comment
Read more

May 10, 2020
Chances are if you have a toddler in your home, your little one is enjoying the April selection from Dolly Parton’s Imagination Library as much as this little cutie.  Corduroy’s Shapes is a delightful book that explores shapes using bold colors, wonderfully textured outfits, and appealing rhymes. A snuggle up bedtime story routine is essential, but no need to save this one for bedtime.   W ith many of us now sheltering in place and being with our little ones all day, anytime is a good time to reach for a book. Preschool teachers have long used books as a spring-board for play-based learning. With Corduroy’s Shapes , for example, why not have a Teddy Bear Picnic and make story-time a part of the activities. With this age group very little preparation is required.   Just grab a blanket or towel and some “shape themed” snacks – think round cheerios or banana slices, square or rectangular crackers, cheese cut into triangles or diamonds -- the possibilities are endless.   Of
Post a Comment
Read more